Some very engaging soccer today. Denmark trounced Russia 4-1 and got the help they needed from Belgium to beat Finland. So the Danes go from last to second and move on.  The Dutch were already through and won their group. Austria beat the Ukraine to take second.

England vs Czech Republic - draw and both are through. England will balance that with knowing that a win keeps them in London for the next round. Both teams would be in  a hunt for a best 3rd place spot with a loss. This game could be a bit slow with then knowing a draw gets both through but a loss could knock them out. Look for England to go long down the wings and find Kane at the edge of the area.

Scotland vs Croatia - Either team has a shot at 2nd in the group depending on how the other game goes. But they must win to have a shot at 2nd or a best 3rd place slot. So this game may start cautious but sooner or later its gonna open up. If a team scores early this game could get very open.

Side note. As I have written before today is a great example on why most tournaments have matchday 3 of the Group Stage having both games played concurrently.  In this case lets say the Scotland vs Croatia game were first and ended in a draw. England and the Czechs would know that they were in regardless of the result in their match meaning that they would both likely make wholesale lineup changes to rest players providing a big advantage the rest of the way. 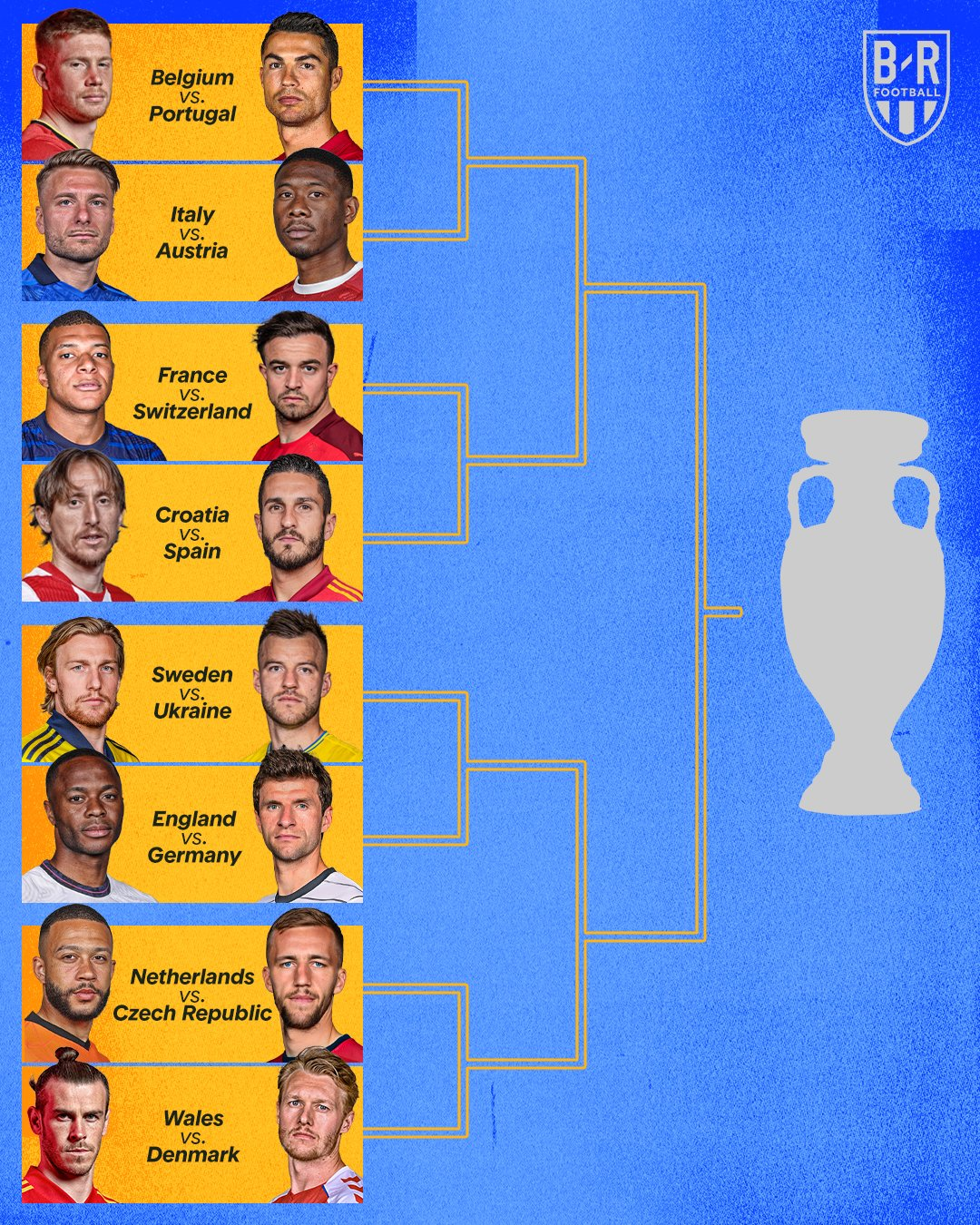 England v. Germany at Wembley should be fun

Review of the Group Stage and a look at the Round of 16.

Poland's results in the past two tournaments have to be frustrating when you've got one of the best strikers in the world. Obviously Bayern's got slightly better talent surrounding him than Poland but it's still wasting a generational talent for your country.

Poland's results in the past two tournaments have to be frustrating when you've got one of the best strikers in the world. Obviously Bayern's got slightly better talent surrounding him than Poland but it's still wasting a generational talent for your country.

1. The big clubs are just all start teams.

2. National teams just don't get to play together near as much as players do with their club teams. In a fluid sport like soccer that is just so key.

Belgium and Portugal kicking off on ABC.

Heart breaking loss for the Portuguese. They had ample chances.

The Ringer: All Your England-Germany Euro 2020 Questions Answered

Yeah baby, the Three Lions are moving on after a tight match with Germany. 2-0 for the W. Game was much closer than 2-0 indicates. Timo Werner had a semi break and shot it into Pickford. And Thomas Mueller had a clear break off a bad back pass and just flat missed. That's what happens in matches at this level. The team that finishes their chances wins. You get so few in these types of games that you just have to connect.

The English finished their two great chances. Both goals scored on square passes deep inside the area. Sterling with a shot and Kane with a header. Manuel Neuer had no chance on either shot.

And the Group of Death was literally that. All four teams were good enough to advance the Round of 16. Three did. And they all died....not one made the quarter-finals.

Second-half goals from Raheem Sterling and Harry Kane gave England a 2-0 win over Germany at Wembley Stadium on Tuesday. This loss marks Germany’s first in the round of 16 at a major tournament. England will face either Sweden or Ukraine in the quarterfinals on Saturday.

The Ringer: At Euro 2020, Calculated Risks Reap the Greatest Rewards

And the first match of the quarters just kicked off. Swiss  vs Spain. Spain favored after that last offensive explosion but the Swiss aren't any slouches having knocked off France.

And this is the same Swiss team that beat the US 2-1 a month ago in a very close match.

Back to Soccer / Golf / Tennis