A 16 year old French boy found it in grandfathers house and made a point to track down who it belonged to, to return it if possible.

William Kadar wasn’t sure what all the fuss was about when his granddaughter, Arleen Haas, handed him a carefully wrapped package Tuesday morning.

But once he read the letter inside — thanking him for his Army service in France during World War II — and noticed the drab green material underneath, he found his Army-issue duffel bag folded up.

He ran his hands over the stenciled black print, listing his name and serial number, and tried to recall when he separated from the bag in November 1944 — more than 68 years ago.

The bag was empty, however, having been cleaned out years ago.

From time to time I come across WWII related information that I think is interesting.

Instead of doing a new thread for each, I or anybody else, will post in this thread.

Lots and lots of photos...

I do some work for a store that buys storage lockers. I come across WWII memorabilia and personal items from the war from time-to-time. It's fascinating to look through and a little bit heartbreaking to think that somebody in that person's family might want the stuff. But we've found it really difficult to try and find family and when we do, they often don't really care about their ancestor's items.

As a 22-year-old German army lieutenant, Ewald-Heinrich von Kleist volunteered to wear a suicide vest to a meeting with Adolf Hitler and to blow himself up along with the Nazi dictator.

The assassination didn't come to pass, but von Kleist went on to play a key role in the most famous attempt on Hitler later that same year, and was the last surviving member of the group of German officers who tried and failed to kill the Fuehrer on July 20, 1944.

Von Kleist died Friday at age 90 at his home in Munich, his wife Gundula von Kleist told The Associated Press.

Not WWII related, but.

The new USPS creed... "Neither snow nor rain nor heat nor gloom of night stays these couriers from the swift completion of their appointed rounds, unless the letter got lost..."

It's a story about love, public service and a delayed delivery. Nearly 60 years ago, Robert Rodgers sent a letter from Army basic training in Fort Campbell, Kentucky to his wife, Jean, in New Carlisle. But he recently found out that letter somehow got lost and he had no idea his wife never received it.

The two married about six months before he shipped off to basic training with the Army’s 503rd Airborne Infantry. He was 21 when he wrote the letter in June 1953, his wife was 19.

A story of this from Huffington Post. Kudos to the grandson for doing this for his grandfather.

My Grandad was in the Royal Navy in WWII, in the submarines. I went over to set up his new PC that I'd made for him a few weeks ago and he showed me a photo that a relative had emailed him, of him in his uniform back when he was about 20. The photo was in a bad state and I said I'd see what I could do to sort out some of the cracks.

Thanks for the periodic updates here. I really enjoy it.

69 years ago....around 1:00 AM paratroopers were landing in Normandy France. Around 6:30 AM the amphibious landings had commenced in what would be the largest amphibious invasion in world history. The task of moving the troops and supplies involved an invasion fleet that was drawn from eight different navies, comprising 6,939 vessels: 1,213 warships, 4,126 transport vessels (landing ships and landing craft), and 736 ancillary craft and 864 merchant vessels! Casualties for the 1st day was an estimated 10,000 (4414 dead) and these figure seems to keep changing as record keeping was chaotic back then. If it had failed (pushed off the beaches), than your looking at 1945 before the Allies could try again. History today would be different and many more lives would have been lost.

"A few moments after 1 a.m. on June 6, the boots of American and British paratroopers thudded upon the soil of France."

So begins U.S. News's detailed description of one of the largest invasions by land, sea and air in the history of the world.

In this day and age, detailed information flies around the world within minutes of news breaking. But 69 years ago, things were a little different. It took several weeks for U.S. News & World Report (known at the time as The United States News) to get a detailed description of what happened on five beaches in Northwest France on Tuesday, June 6, 1944.

In an article that ran 24 days after the invasion, U.S. News paints a picture reminiscent of the opening scenes of Steven Spielberg's 1998 film "Saving Private Ryan," with troops descending "in misty darkness on the narrowest part of Normandy, where the shore swings north" and a "death trap" of machine guns and cannons encountered by the American invaders.

"On this beach, losses were high. Even men who got through that fire were able to advance only 100 yards inland in several hours of fighting."

One of many days I reflect on every year. Thanks.

I applaud people that make documentaries like this one. It has someone to a very happy person...

As as he said in the video... "any pilot should fly a Spitfire, at least once."

On a sizzling day, one of Maryland's premier summer destinations turned ghost town while an Army bomb squad exploded World War II-era munitions that had washed up at Assateague Island National Seashore.

"We are taking our time to make a complete assessment, but we're not anticipating any further issues," said Daigneault, who did not expect the public to cancel July 4 holiday plans. The park has 148 campsites and all are booked.

"I have received this afternoon a message from the Japanese Government...

'His Majesty the Emperor is prepared to authorize and ensure the signature of his Government and the Imperial General Headquarters of the necessary terms for carrying out the provisions of the Potsdam declaration...and all the forces under their control wherever located to cease active operations, to surrender arms.'"

An incredible thing for the Brits to do and I applaud them...

Harold Jellicoe Percival, a Royal Air Force veteran who served during World War II, died in a nursing home on Oct. 25. The 99-year-old had no surviving family members or friends to attend his funeral, so the facility posted a notice in a local newspaper, asking service personnel to attend.

Other local media picked up the story, and the photo of the initial callout was widely shared on social media. It seems the Internet listened.

On Veterans Day, known as Armistice Day in the United Kingdom, hundreds of strangers turned up at the Lytham Park Crematorium in England to show their support for the deceased veteran.

To the end, Edward James “Babe” Heffron insisted that he wasn’t a hero, that his service in World War II was simply part of an obligation to serve his country in a time of need.

But when fame followed him in the wake of Stephen Ambrose’s book “Band of Brothers” and its HBO miniseries, Heffron, who died Sunday at the age of 90 after a short battle with colon cancer, used it to praise the sacrifices made by countless men and women during America’s most trying times.

He felt the heroes were the moms who sent their kids off and the guys who never came back,” Ed Zavrel, Heffron’s son-in-law, told FoxNews.com Tuesday night. “Babe didn’t consider himself a hero, just a guy who did his job."

As a paratrooper in Company E, 506th Parachute Infantry Regiment, 101st Airborne Division, Private Heffron joined Easy Company shortly after the Normandy invasion and participated in some of the war’s fiercest battles, including the Battle of the Bulge in Belgium. He received a Bronze Star and a Purple Heart.

Today, 72 years ago Pearl Harbor was attacked.... just ninety minutes after it started 2,386 Americans had died and another 1,139 were wounded. One of the main attractions at Pearl Harbor is the USS Arizona Memorial which marks the resting place of 1,102 of the 1,177 sailors and Marines killed on the USS Arizona during the attack. 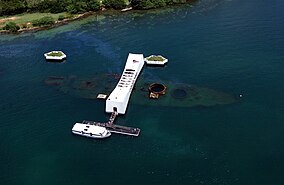 The remaining vessel afloat today that was located at Pearl Harbor is the USCGC Taney and is now located in the Baltimore Inner Harbor and part of the Baltimore Maritime Museum. Some interesting info on the ship found on their Wiki page.

I visited Pearl Harbor many times when I was in the Navy. There are few things as powerful as standing on the superstructure looking down on the Arizona as you pull into port.

An interesting read on Hollywood and the Nazi's from the 1930's...

It’s a shocking revelation, first reported in Tablet magazine: During the 1930s, Hollywood’s movie studios secretly collaborated with the Nazis. The Jewish moguls, taking their orders from Berlin, suppressed anti-Nazi scripts, cut every positive reference to Jews out of their films, and released one “pro-fascist film after another.” A small coterie of wealthy Jewish-Americans betrayed their country and sold out their co-religionists. Their sole motive was profit, pure and simple.

It sounds like another cracked, anti-Semitic conspiracy theory dredged up from some Truther website, but it’s the thesis of a recent book from Harvard University Press, The Collaboration: Hollywood’s Pact With Hitler, written by a freshly minted young Berkeley Ph.D., now Harvard Junior Fellow, Ben Urwand, and supported by documents culled from German archives, pages of supplemental notes, and back-cover bona fides from respectable historians like Richard Evans, who also reviewed the manuscript for the Harvard Press. “It is time to remove the layers that have hidden the collaboration for so long,” the author writes in his prologue, “and to reveal the historical connection between the most important individual of the twentieth century and the movie capital of the world.”

The Collaboration, however, reveals nothing of the sort. The book’s astounding claims are not only flatly contradicted by more credible accounts the author inexplicably ignores, but his thesis is undercut by evidence, old and new, he himself provides. The author misunderstands classic films, not to mention the social and political history of the period. One can’t help wondering why the Harvard Society of Fellows thought this book worthy of support and what Harvard University Press intended by publishing it.

I picked up a Mosin Nagant at Gander Mountain for $99 the other day.    I wonder how many Nazis it killed?

Missed this in the summer. I guess many did; it's the #3 watched/listened feature on the BBC website at present.