I view this as a way that Phil can get back in the game, but without any real pressure at all considering nobody on the planet actually expects him to succeed there.

I'm guessing he'll be what Bill Parcells was to the Dolphins, he'll install his system, stay 3-4 year, and then gradually fade away. Steve Kerr btw has been linked to the Knicks head coaching job FWIW.

I could see Kerr being a solid NBA coach.  For whatever reason he reminds me of that Jeff Hornacek type who has done a great job in Phoenix.

@ESPNStatsInfo Dont expect a long tenure for Phil Jackson. Each of last 5 Knicks presidents have lasted fewer than 5 seasons. 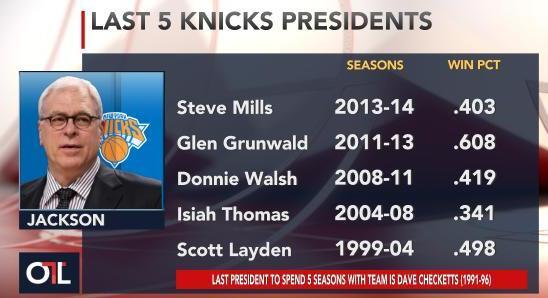 I was wondering what they were going to do here if at all.

"There is an understanding all trades are approved by the NBA, and I don't anticipate any problem because I don't make the basketball decisions on behalf of the Lakers," said Buss, who has indeed previously ceded all basketball decisions to her brother Jim and team general manager Mitch Kupchak. "So I really don't see where there would be a conflict."

ESPN reports that as Phil Jackson prepares to start actually making moves as the new head of basketbal operations for the New York Knicks, he's planning on hiring a GM to handle day-to-day operations and negotiating, while moving Steve Mills to a business position. And current interim Cavs GM David Griffin could be the guy.

ESPN is reporting that Mike Woodson has been fired. The Steve Kerr watch has officially officially begun.

You could do a lot worse than having Phil Jackson and Steve Kerr in your franchise.

I actually think they could be successful.

CSN Chicago: Melo expected to return to the Knicks

CSN Chicago: Melo expected to return to the Knicks

@WojYahooNBA Just a matter of hours until Carmelo Anthony informs the Knicks of his return on a five-year deal, as @FisolaNYDN reported this week.

Sports on Earth: Triangle won't save the Knicks

Sports Illustrated: No excuse for the Knicks' worst start in franchise history

CBS Sports: Should the Knicks shut down Carmelo Anthony and play the lottery?

Deadspin: ESPN Wants Nothing To Do With The Knicks

In fact, the only other time you will see the Knicks on ESPN this season is Sunday, Feb. 1, against the Lakers in a game that ESPN cannot flex out of because it is the only game on the schedule at that time. That's right: after showing their first two Knicks games of the season, ESPN has now flexed out of every single Knicks game they possibly can.

Man, the Knicks are awful. They were a mediocre 4-10 on November 22nd....1-25 since, including losing 15 straight. Their roster is made up of guys that wouldn't crack most other team's rotations.

Phil has his work cut out for him..

Dolan: "Start Rooting For The Nets Because The Knicks Don't Want You"

I wrote this for Impose-

As many shitty, irrelevant teams as the Knicks have had in the post-Ewing era, I'm almost surprised none of them manage to lose 60 games. This year's team is about to be the worst in franchise history (though extremely unlikely, they still have a chance to be better on a percentage basis than a few of the early '60s teams).

So, after going into tank mode about 10% of the way into the season, the Knicks are suddenly showing signs of being a basketball team just as they were about to wrap up the league's worst record, and their fans are none too pleased. And while I always enjoy a nice jab at Knicks fans, I get the frustration too.

My most disliked thing about the NBA today is how the rules encourage front offices to tank, but seeing as those are the rules in place, I understand why many go that route. I also totally understand that the players that are on the court are always going to try to win, which is the way it should be. But when you are selling your fans on a future centered on having one of, if not the, first choice among the best players coming out of college, don't expect your fans to be doing cartwheels when you jeopardize that plan by winning meaningless games in the waning days of a lost season.

This doesn't have to be complicated. Take the 14 non playoff teams. Put their names in a hat. Draw the draft order.

This doesn't have to be complicated. Take the 14 non playoff teams. Put their names in a hat. Draw the draft order.

So the decent team that just misses the playoffs should have the same chance at a franchise-changing player as a terrible team?