Lets just read the 1st paragraph in this article... one helluva day for a 22 year old from Pittsburgh Pennsylvania.

He killed 40 Germans in less than an hour. The next day, he earned the Medal of Honor for killing more. Commando Kelly did it by becoming a one-man army, holding back scores of German soldiers who surrounded the house where he was trapped with 30 other GIs. He used every weapon he could find—three Browning Automatic Rifles (BARs), a Thompson submachine gun, a Springfield rifle dating from World War I, a carbine, and an M-1 rifle.

With Christopher Nolan's Dunkirk in the news...

German view of the operation...

Why Nazi Germany's Super Submarines Were a Super Failure 77 years ago today before the House of Commons... 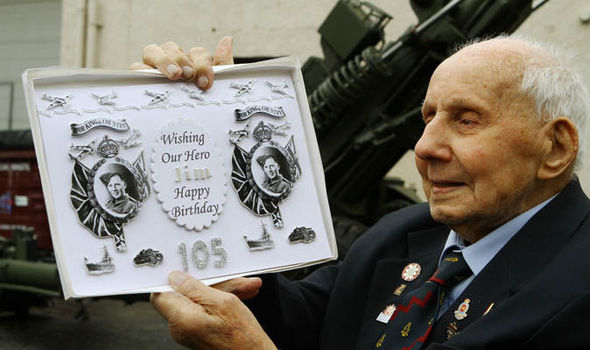 The invasion of the Dutch East Indies -

Between 1966 and 1980, the War History Office of the National Defense College of Japan (now the Center for Military History of the National Institute for Defense Studies) published the 102-volume Senshi Sōsho (War History Series). These volumes give a detailed account of the operations of the Imperial Japanese Army and the Imperial Japanese Navy during the Second World War. Volume 3 of the series, The Invasion of the Dutch East Indies, describes in depth the campaign to gain control over the Indonesian archipelago – at that time the largest transoceanic landing operation in the military history of the world. The present book is the first complete and unabridged translation of a volume from the comprehensive Senshi Sōsho series. It enables military historians and the general public to see and study for the first time how the operation that put an end to Dutch colonial rule in Indonesia was planned and executed. Willem Remmelink was the executive director of the Japan-Netherlands Institute in Tokyo for more than twenty-five years. He is a specialist in Japanese and Indonesian history.

Results of naval shelling before the landings...

Military identifies 100 killed on the battleship Oklahoma in Pearl Harbor

Raise the California! How they brought the [13] ships sunk at Pearl Harbor back from the dead

Damage during Pearl Harbor: Seven Japanese torpedos to the port side, hit by two bombs, caught fire from the burning USS Arizona and sank to the sea floor

Repairs: Pumped free of water and patched up so that it could be sent to Washington's Puget Sound Naval Yard for full repairs

WWII service: The USS West Virginia took part in the Battles of Iwo Jima and Okinama and was present in Tokyo Bay when the Japanese surrendered after the second atom bomb was dropped on Nagasaki

On this day, General George S. Patton employs an audacious strategy to relieve the besieged Allied defenders of Bastogne, Belgium, during the brutal Battle of the Bulge.

The capture of Bastogne was the ultimate goal of the Battle of the Bulge, the German offensive through the Ardennes forest. Bastogne provided a road junction in rough terrain where few roads existed; it would open up a valuable pathway further north for German expansion. The Belgian town was defended by the U.S. 101st Airborne Division, which had to be reinforced by troops who straggled in from other battlefields. Food, medical supplies, and other resources eroded as bad weather and relentless German assaults threatened the Americans’ ability to hold out. Nevertheless, Brigadier General Anthony C. MacAuliffe met a German surrender demand with a typewritten response of a single word: “Nuts.”

Enter “Old Blood and Guts,” General Patton. Employing a complex and quick-witted strategy wherein he literally wheeled his 3rd Army a sharp 90 degrees in a counterthrust movement, Patton broke through the German lines and entered Bastogne, relieving the valiant defenders and ultimately pushing the Germans east across the Rhine. 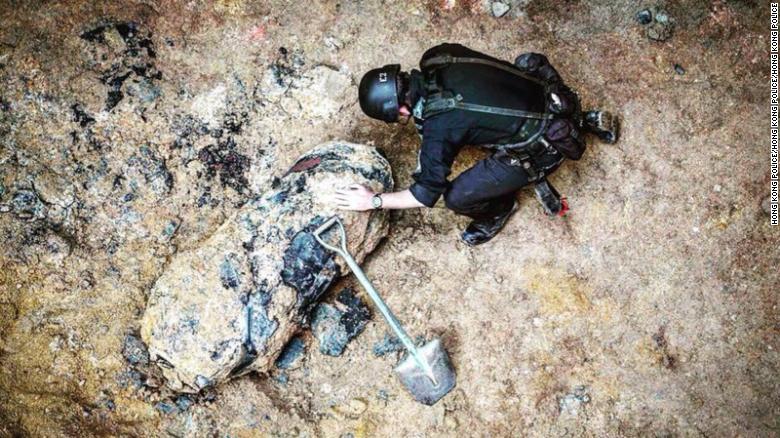 Yesterday marked the 73rd anniversary of the raising of the US flag atop Mount Suribachi, Iwo Jima. Below a good article from the Marine Corps Times on it...

Iwo Jima: The story behind Alan Wood and the famous flag on Mount Suribachi 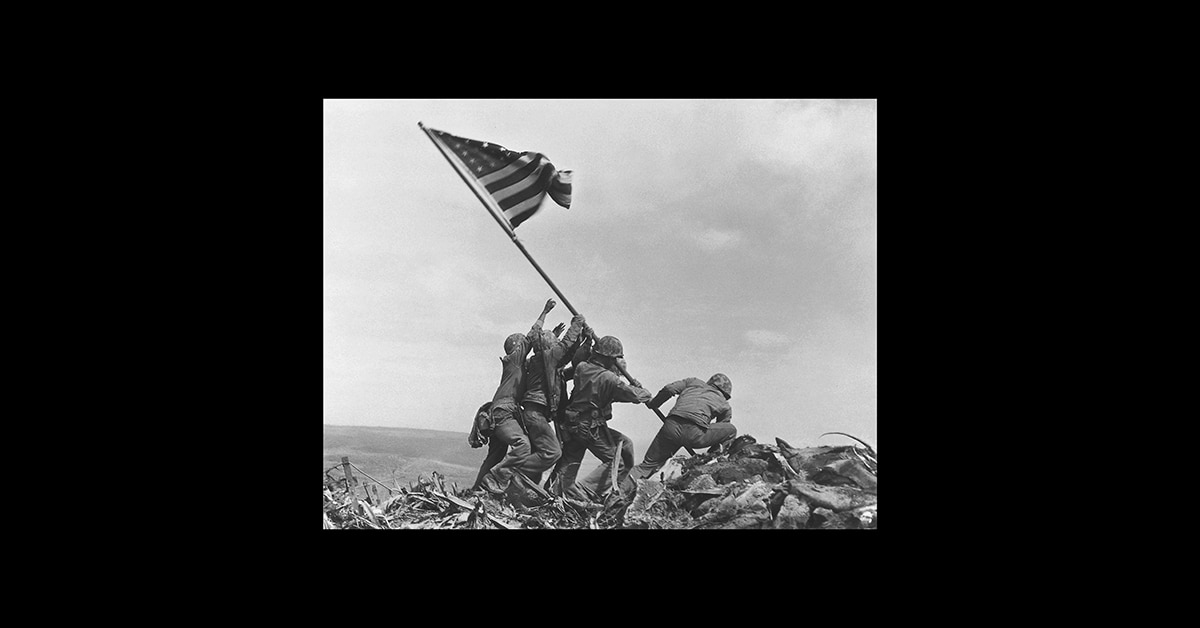 Wreckage from the USS Lexington was discovered on March 4, 2018 by the expedition crew of Paul G. Allen’s Research Vessel (R/V) Petrel.

Lexington was at sea when the Pacific War began on 7 December 1941, ferrying fighter aircraft to Midway Island. Her mission was cancelled and she returned to Pearl Harbor a week later. After a few days, she was sent to create a diversion from the force en route to relieve the besieged Wake Island garrison by attacking Japanese installations in the Marshall Islands. The island was forced to surrender before the relief force got close enough, and the mission was cancelled. A planned attack on Wake Island in January 1942 had to be cancelled when a submarine sank the oiler required to supply the fuel for the return trip. Lexington was sent to the Coral Sea the following month to block any Japanese advances into the area. The ship was spotted by Japanese search aircraft while approaching Rabaul, New Britain, but her aircraft shot down most of the Japanese bombers that attacked her. Together with the carrier Yorktown, she successfully attacked Japanese shipping off the east coast of New Guinea in early March.

Lexington was briefly refitted in Pearl Harbor at the end of the month and rendezvoused with Yorktown in the Coral Sea in early May. A few days later the Japanese began Operation Mo, the invasion of Port Moresby, Papua New Guinea, and the two American carriers attempted to stop the invasion forces. They sank the light aircraft carrier Shōhō on 7 May during the Battle of the Coral Sea, but did not encounter the main Japanese force of the carriers Shōkaku and Zuikaku until the next day. Aircraft from Lexington and Yorktown succeeded in badly damaging Shōkaku, but the Japanese aircraft crippled Lexington. Vapors from leaking aviation gasoline tanks sparked a series of explosions and fires that could not be controlled, and Lexington had to be scuttled by an American destroyer during the evening of 8 May to prevent her capture.

Now they've found the ship that went down with all 5 Sullivan brothers (the real-life prequel to "Saving Private Ryan"):

After 73 years, the remains of a Tuskegee airman lost over Europe may have been found

The U.S. Navy's storied St. Louis-class light cruiser began her World War II service at Pearl Harbor and took part in three significant battles during the Solomon Islands campaign before being sunk by Japanese torpedoes on July 6, 1943, during the Battle of Kula Gulf. All but 168 of Helena’s 900 crew survived the sinking and eventual rescue.

Allen's team found the wreck 860 meters below the surface in the New Georgia Sound off the coast of the Solomon Islands.

Oldest US Military Survivor of Pearl Harbor Dies at Age 106

LOS ANGELES — The oldest U.S. military survivor of the Dec. 7, 1941, attack on Pearl Harbor that plunged the United States into World War II has died at age 106.

Chavez had visited Washington in May where he was honored by President Donald Trump during Memorial Day services.

He was assigned to the minesweeper USS Condor when Japanese war planes bombed Pearl Harbor.

For the first time, no USS Arizona survivors are expected to attend the annual commemoration of the attack on Pearl Harbor, the pivotal Dec. 7, 1941 day of "infamy" that pulled the U.S. into World War II.

The handful of Arizona survivors -- Lou Conter, Don Stratton, Ken Potts, Lonnie Cook and Lauren Bruner -- are all in their 90s and now find travel to be difficult, according to Hawaii News Now.

"This is the very first year" that no Arizona crew members will participate, Daniel Martinez, a historian with the World War II Valor in the Pacific National Monument, told the news outlet.