68 replies to this topic

TCL is a great budget brand. Very good quality for the price.

I haven't bought a TV in a while, but I would make sure as a sports fan you have one that is 120hz, meaning the pictures refreshes 120 times per second. I had one before my current tv that I've for three years now that was only a 60hz. When I'd watch baseball, the ball would look like it had a tail on it on those throws from 3rd to 1st. Or in football when the QB throws a deep pass and the camera quickly jerks or to the wideout, the picture gets a tad blurry in that motion. On a 120hz TV you won't have that problem. But I wonder if 120hz is the standard now and if you even have to worry about it. Wonder if with the complexities of 4K if you would want 240hz or 480hz, or if 120hz is still ok for regular HD programming.

That's interesting. Maybe when I had a 60 hz TV it really was a 30 or something. It was annoying watching baseball on that thing. It was a bargain TV, get what you pay for, but still.

Have a 65" Vizio now that I've had no problems with and didn't break the bank at all.

I've got to stay away from this thread.  It's making me think I need a new TV!

So Roku vs Fire TV. I went with the TCL Roku as I'm not too crazy over Fire TV interface and limited with applications. The TCL has a 5 star rating with 75% out of 2250 customers. PLUS this review by Linus Tech Tips plus other research.

TV price points have remained fairly consistent for a while now, IMO.  Basically, for a 50" TV, your options are:

You'll spend a bit more on bigger screens if you've got the space in your room to justify it.  In general, you've gotta screw something up to get stuck with a bad TV at this point, at least as far as picture is concerned.  There are only degrees of quality unless you go with some insanely dubious off brand.

TV price points have remained fairly consistent for a while now, IMO.  Basically, for a 50" TV, your options are:

You'll spend a bit more on bigger screens if you've got the space in your room to justify it.  In general, you've gotta screw something up to get stuck with a bad TV at this point, at least as far as picture is concerned.  There are only degrees of quality unless you go with some insanely dubious off brand.

I bought a Samsung Q8 65 inch TV last fall and paid a lot for it. I wanted something at the top of the game since I don't plan to buy another one for a long time and didn't want the tech to be outdated. Plus I had a projection TV for 15 years so I was able to justify spending more since I haven't bought a TV since 2003. The Q8 is amazing. My friend had one and it was the best looking TV I'd seen, so I bought one when we re-did our basement. The screen is divided into 9 blocks that can handle light independently of one another, so when the image is really dark, like a lot of scenes on GOT are, a torch doesn't wash out the whole screen in a haze. It is isolated to that one block.

I helped my dad hang a 65 inch LG this weekend. I think he spent $1000 for it, or thereabouts. Right away I noticed the inferior picture. Still looks good, don't get me wrong, but the image was still dark on the brightest setting and in a dark room.

So it all depends on what you want out of a TV, really. I've always believed in you get what you pay for. And since I've always been an A/V guy, I believe in getting the best or close to it and keeping it forever. I have $500 Klipsch speakers I've owned since I was in high school.

I bought a Samsung Q8 65 inch TV last fall and paid a lot for it.

Don't think they make a 50" version of that TV, but the 55" is on the lower end of the top level price point that I mentioned.

For $1500+ you can get a TV that's absolutely perfect at the 50" size.  If you want bigger, it costs more.  A television is probably the best product to find yourself in need of.  No matter your budget, you'll end up with something you should be very happy with.

So I decided to get two more TVs and mount them above my current 55" LG that is on a TV stand. Going for that three TV look which will be especially good for college football season (if we have it).

My wall is about 10 feet across so they should fit very nice and still have enough wall room visible as a backdrop.

Question about mounting (if I try to do this myself, lol).

I understand that the mount needs to go into a stud. What if the studs aren't in the right place on the wall where I want to mount the TVs? Obviously, if I want them to look nice and be positioned equidistant from the third TV and the wall, where I mount them is very important.

Also does anyone have a recommendation for a cheap, easy to install wall mount?

Finally, about hiding the wires behind the wall, I get that it's against code to actually have a power cord behind a wall so you need something like this:

Anyone have experience with these? Is there a brand you can recommend or are they all pretty much the same?

Mounting a TV is super easy, good beginner project.  You need a drill/driver and a level.  Most mounts actually come with a tiny level so you don't even need to buy one.

Your studs will be every 16 inches.  Most mounts will have a faceplate that goes onto the wall and then some sort of slider or articulating arms that connects to the TV.  So even if your studs aren't exactly where you want the center of the TV, you'll be fine as you can configure the TV to be positioned a little left or right of the center of the mount.  The mount likely is wide enough to span two studs, so you make sure you're in two and then you're all set.  Some mounts are more vertical, then you'd have screws at the top and bottom of a single stud, but I'd go with a wider one.

If for any reason you truly can't line up to mount directly into the studs, get some heavy duty drywall anchors rated for the right weight and install those.

To hide the wires and power cord, just cut a hole in the drywall behind the TV and then cut a hole down below the TV where you want the wires to come out.  You then just fish the wire down.  You won't be able to run horizontally across a stud, can only go straight down, unless you open up the whole wall which you don't wanna do.  You can use those faceplates you linked if you want, but I don't think it's necessary.  A drywall knife would be good for cutting a cleaner hole, but you can just poke a hole with a screwdriver or hammer and open it up a bit with your fingers.  It won't look pretty, but it'll be hidden by your TV at the top and by your entertainment center at the bottom.

I guess I should also add that since these TVs will be streaming do I need to boost the juice on my current internet plan to stream three TVs at once?

You'll probably be fine. Divide your current speed by 3 and check if thats is enough to stream HD. Assuming you've got 100 MB/sec or more you should have plenty with some left for devices.

I'd check it once installed and upgrade only if needed.

TVs are currently being mounted!  Three MLB games at once starting tonight!

And an 18 pack of Coors Light. 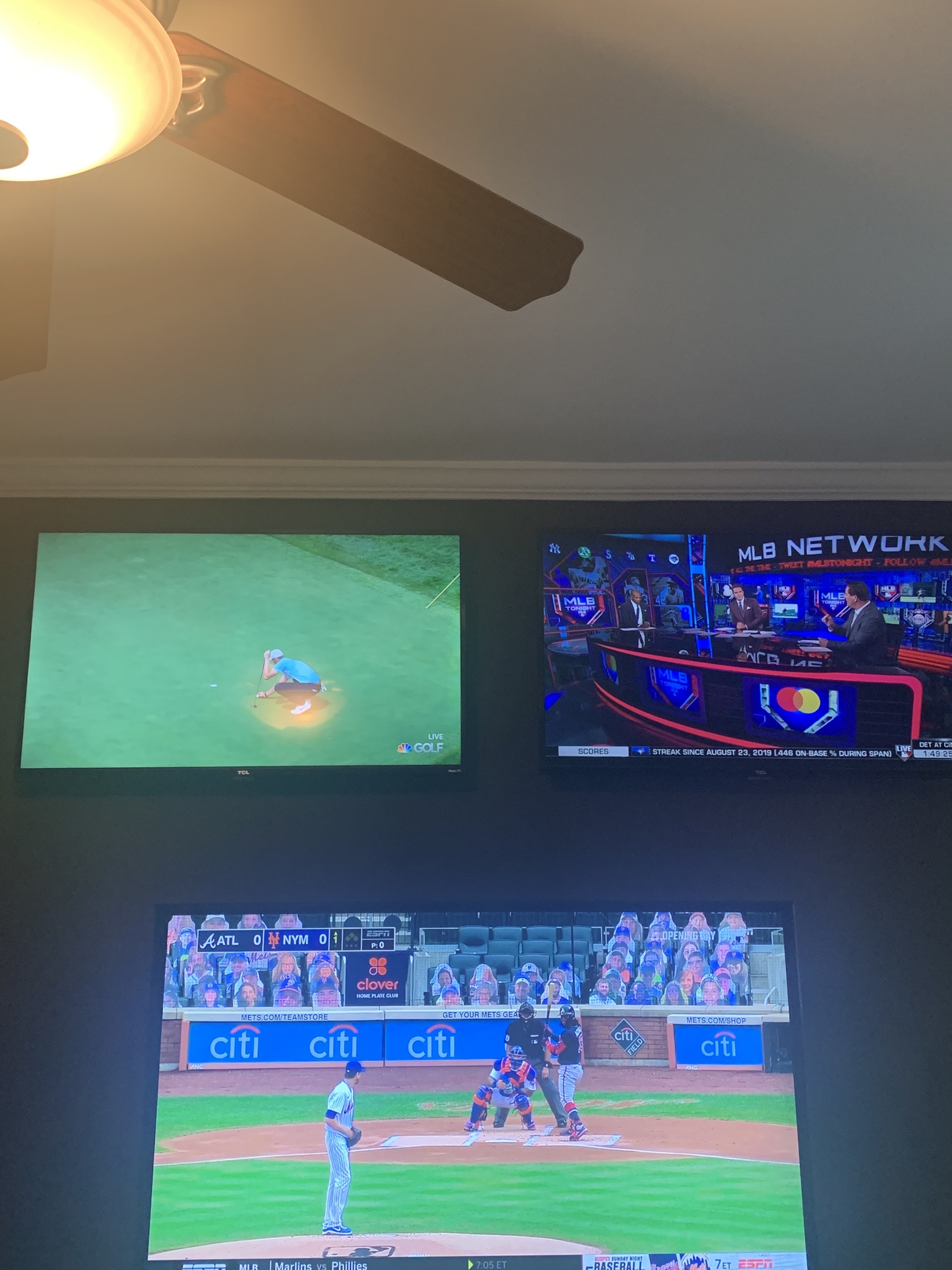 So, do any cable channels air anything live in 4K? Like live sports? How often?

Don’t have a 4K tv but looking to upgrade. Also the cable provider out here doesn’t have 4K channels. But to watch live cable through their app requires specifically an Apple 4K TV ($70 off today on Prime day).

I guess streaming live sports through this cable provider in 4K is literally the only reason I need the Apple TV box, but they aren’t doing that yet? Otherwise if I get a 4K TV it likely has all the apps built in, right? And if they have 4K content, great?

Fios has two 4K channels that are almost always off air. Occasionally show some sports.

All the streaming services have a lot of 4K content.

Back to Technology, Gaming