25 replies to this topic

Welcome Sam!  Enjoyed this... helped fill in the gaps I had about MLL.

The investment in the league is increasing. I think there is real growth opportunity here.

Huge game tonight at 7:30 for the Bayhawks with major playoff implications. Last one of the regular season against the top team Denver Outlaws in Annapolis.

Look for Lyle Thompson to make an impact in the game. Last Thursday, when the two teams met, Lyle wasn't in the lineup, and the Bayhawks lost the game in OT.

Don't think it will be on live TV tonight, but will be aired online at laxsportsnet.com. Game will be played on cable Sunday afternoon on CSN.

Win and Ohio beats Rochester on Saturday, they're in.

Rattlers 14, Machine 13. Jordan Wolf with the game winner with 1:29 remaining. Bayhawks are eliminated from playoff contention.

Rattlers 14, Machine 13. Jordan Wolf with the game winner with 1:29 remaining. Bayhawks are eliminated from playoff contention.

Sorry that their season has ended, but thanks for the update.

As College Lax continues to grow, it seems like MLL has a similar opportunity.

Good article here on that: 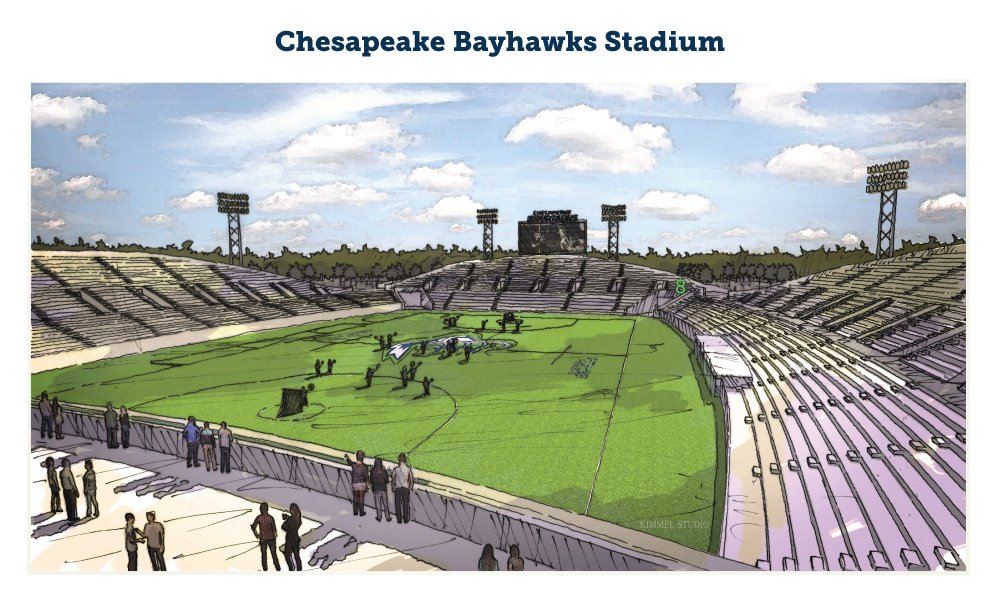 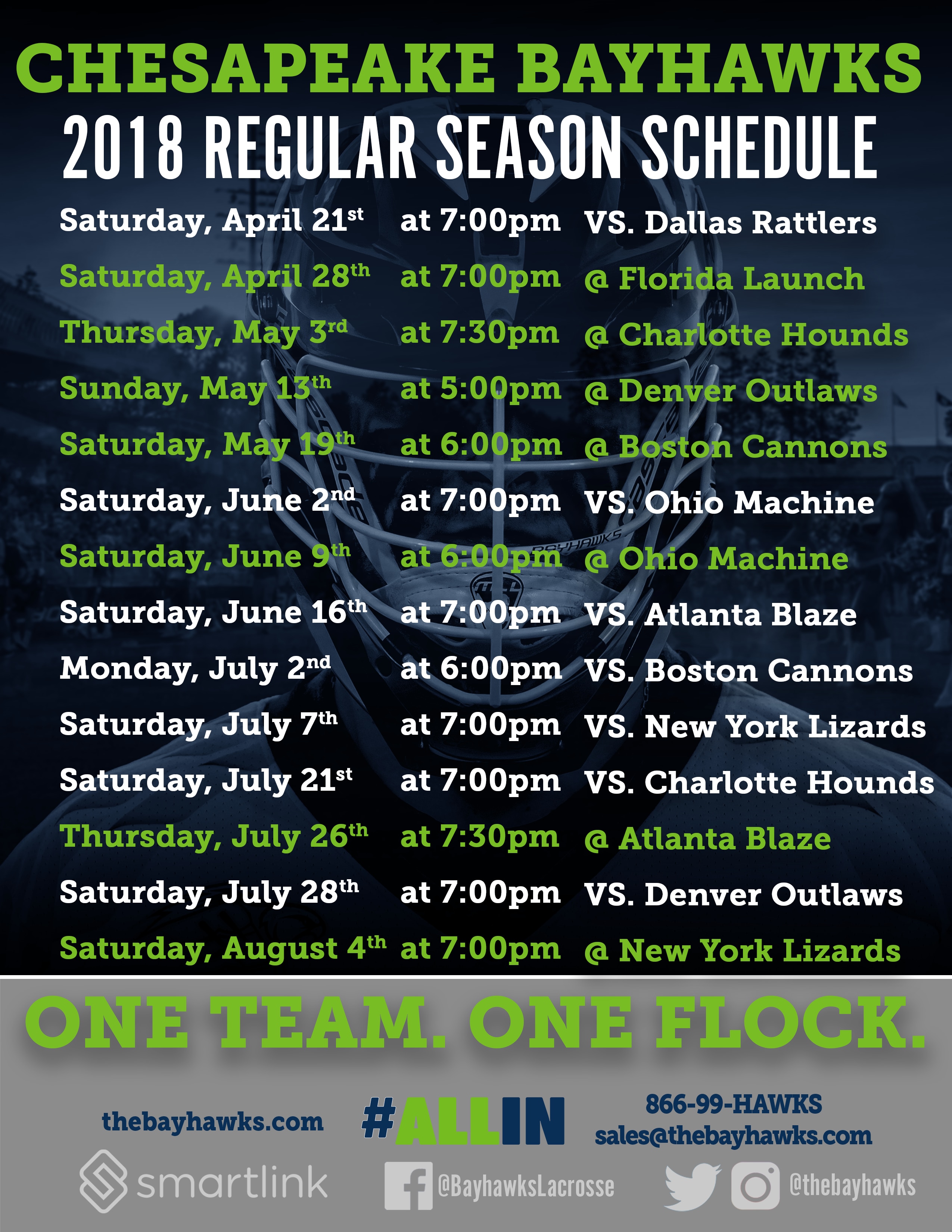 Balt Sun: Burdett working to take the Chesapeake Bayhawks to the next level

With July being a busy month including the FIL World Championships, the MLL took a bit of a
break during the middle of the month, but is slated to come back with a bang as teams look
forward to the end of the season and the playoff push. The Bayhawks returned from the break
last weekend against the Charlotte Hounds and took quite the setback.

Without some of their top scorers (Steele Stanwick, Matt Danowski, Josh Byrne) the Bayhawks
offense became stagnant and allowed the Hounds to come out of the gates firing, increasing
their lead to 10-3 by halftime. Despite Stephen Kelly winning the faceoff battle, the Hounds were
able to generate more shots and shots on goal en route to a 20-10 win. This was a big win for
the Hounds, who currently sit in fourth place and have a slight grip on the last playoff spot. In
terms of the Bayhawks, the loss dropped them to 8-3, with three remaining games against
Atlanta, Denver and New York, all of which are fighting for the third and fourth spots.

As you can see, the battle for the fourth playoff spot is very much still up in the air, but as of
today, the Bayhawks look like they have mostly secured a spot. Even with three losses, they
could potentially be in a tiebreak with four other teams.

The playoffs, however, could be set by the end of this weekend. With the United States taking home the gold in the FIL World Championships over Canada on a buzzer beating goal, players have returned to the states and look to finish up the regular season. Many teams play doubleheaders over the weekend, and there are games Thursday, Saturday and Sunday.

The Bayhawks head to Atlanta tomorrow evening to take on the Blaze at 7:30 before returning
home to Navy Marine Corps Memorial Stadium to finish off their home slate against the Denver
Outlaws.

The game this Thursday will be a big one for both, as Atlanta is coming off two straight wins to
put themselves in playoff contention and remain in the chase at 5-6. Look for Colin Heacock to
continue his stellar year playing out of the box, that is if Stanwick and Danowski come back and
play attack.

The Blaze are led offensively by Kevin Rice (2nd in the league in points) and Deemer Class, and will need significant efforts from the two of them as well as others to keep their season alive.

The Bayhawks will be chasing down the Dallas Rattlers for the first seed in the playoffs for the remainder of the year, which cannot be done without a couple of victories.

Time will tell, but the remainder the MLL season remains very up for grabs...who will be the
team who takes it?

Thanks for the scoop on the lives of some of these guys Sam.  I was curious about that myself.

One of my sons played lacrosse for the first time this past spring and I took him to 2 Bayhawks games.   He seemed to enjoy himself at each.  I must say the in-stadium experience is kind of lacking, though I imagine there's just not much you can do when you have a few thousand people at most filling up a 34,000 seat stadium.  They try hard to get the crowd involved but it's just hard to do when there aren't all that many people there.  It probably also didn't help that both games we saw were fairly comfortable Bayhawks wins, so there wasn't much tension from a competitive standpoint.

All that being said, I do think it's a more impressive sport to watch live than on TV.  Some of that may have been that you can sitpretty much wherever you want so we got down nice and close, and the stick skills that these guys have are pretty special.

If you're looking for something cheap and easy to do sometime, I'd recommend it.  It doesn't cost much, you can get great seats, and Navy Marine Corps is super easy to get in and out of (at least in these instances).  It's not the most thrilling in-stadium experience for now but if my son asks to go again next summer I'll be happy to take him to a game or 2.  I can see the potential of the league, as a full stadium with fan interest would have been very compelling.

Back to Lacrosse (Pro, College, HS)